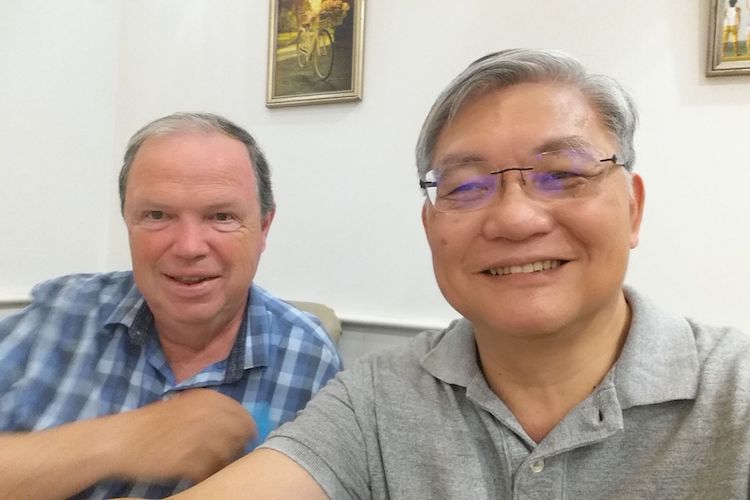 It came as a shock to all of us when we received the news that Don Lewis had passed away. He was only 71 (1950–2021). The second last time I met Don Lewis, he had me in a choke hold. It was Dec 6, 2014, and the occasion was the launch of the Festschrift for W. Ward Gasque at Regent College. Don kinda ambushed me from behind and, for a while, two grown men wrestled in public like two kids. But I knew what it was — the enthusiasm of two good friends meeting after a long time. I would meet Don again in 2016 when he visited Singapore. I regret not meeting up again after that though I did make a few trips to Vancouver since. Bernice and I prioritised seeing Ward Gasque and J.I. Packer, sensing the Lord might call them home soon and indeed He did. But the friendship I shared with Don was forged long ago. It started in 1981 when I began my studies at Regent and he also began teaching there.

It must have been daunting to join the Regent faculty as a young scholar when there were luminaries like J.I. Packer and Bruce Waltke on the faculty. But Don was an excellent teacher. He not only taught us church history, but he also taught us how we ought to approach the subject. He tried his best to get us to interact with the original writings of the people we were studying and not just to rely on others’ opinions of them. One special memory his students treasured was that he would begin each class by getting us to sing a hymn that was connected to the content of what we were to study. I guess this is one of the reasons I get upset with churches that only sing modern worship songs and neglect what God has taught the churches through the ages. Dare I mention that Don gave me an A for both my Church History 1 and 2 final papers?

Don was my teacher but he was also my friend. There was once I went to St. Paul-Minneapolis for a conference on family ministry. I must have caught a bug there. I flew back really sick. Don met me at the airport, took me to the campus doctor, and then he took me home. I am sure this was not in his job description as a lecturer, but it was what a friend would do. This was just one of many instances where you knew he cared for you as a friend. All the Regent faculty tried to do this. (I pray this will always be a central part of Regent culture.) They taught you but they also reached out in friendship. Different lecturers succeeded in doing this to varying degrees, but few did it as well as Don. You knew the friendship was genuine because it continued long after you left Regent. I recently wrote a note of condolence to Lindi, his wife. (Don married one of the smartest and prettiest of his students.) She replied and said, “He (Don) loved you dearly and always prayed for you”.

I miss you dear friend. And I owe you much, not least in my commitment to teach relationally. I don’t come close to how you did it, but I also try to care for my students as my friends. And, indeed, we all look back to Jesus who called His disciples friends (John 15:15). When next we meet, you have my permission to subject me to a choke hold. Can’t wait.