Our Eyes are on the Lord 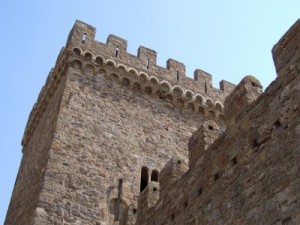 It was a critical moment for the people of God. Because of the work of an evil man, God’s people were on the verge of extinction. In that dark hour, a patriot, Mordecai, remembered that his cousin was queen and might be able to intervene on behalf of their people. Here is part of their exchange:

Then Esther replied to Hathach with instructions for Mordecai: “All the servants of the king and the people of the king’s provinces know that there is only one law applicable to any man or woman who comes uninvited to the king in the inner court – that person will be put to death, unless the king extends to him the gold scepter, permitting him to be spared. Now I have not been invited to come to the king for some thirty days!”

When Esther’s reply was conveyed to Mordecai, he said to take back this answer to Esther:

Don’t imagine that because you are part of the king’s household you will be the one Jew who will escape. If you keep quiet at this time, liberation and protection for the Jews will appear from another source, while you and your father’s household perish. It may very well be that you have achieved royal status for such a time as this! (Esther 4:10-14 NET)

Esther may have been a beautiful queen but no one approached the King uninvited, including the queen. Anyone who did so would be executed unless the King indicated his approval by extending his golden sceptre. If Esther took the initiative to approach her husband to intervene on behalf of the Jews, she risked her life.

Mordecai knew the risk but he still encouraged his cousin to do the right thing. Many lives were at stake. It wasn’t a time to play it safe. Indeed, as Mordecai indicated, playing it safe may not be safe at all. Sometimes we think that by avoiding risks we will be safe. It might be that by shying away from doing the right things, we have hurt ourselves already. As Jesus taught us:

The one who loves his life destroys it, and the one who hates his life in this world guards it for eternal life. (John 12:25 NET)

What I really like about Mordecai’s approach though, is that his ultimate trust is not in Esther but in the Lord. As much as he wants Esther to act, Mordecai is clear that even if Esther chooses not to help, “liberation and protection for the Jews will appear from another source . . .” Mordecai’s ultimate trust was in God. Here then are two key lessons for us.

First, may God give us the wisdom and the strength to do the right thing even if it is costly. Followers of Jesus are not called to grandstanding heroism. But we are called to obedience in our love for God and neighbour. We need to ask day by day what the Lord requires, and do it. Every day we need to visit the garden of Gethsemane, to both discern His will and to ask for strength to surrender to it.

The second lesson is that our ultimate trust must be in a sovereign and holy God. While Mordecai was committed to doing the right thing and challenging others to do the same, his ultimate trust was in God. Reminds me of King Jehoshaphat in 2 Chronicles 20, when God’s people were facing overwhelming odds. Here is part of Jehoshaphat’s prayer:

Our God, will you not judge them? For we are powerless against this huge army that attacks us! We don’t know what we should do; we look to you for help. (2 Chronicles 20:12 NET)

The odds were impossible. Jehoshaphat acknowledged that he didn’t know what to do but he knew who he looked to for help. His eyes were on God. And God delivered Judah with a mighty hand.

By the time you read this, the Sarawak state elections would have been concluded. I have not seen the church in Malaysia this mobilised for a long time. For this I rejoice. Finally, more of us realise that we must not only preach the gospel, we must live out gospel values in all of life, whatever the cost. But we must also remember the second lesson we learn from Mordecai. Our ultimate hope is not in our activism. It is in the Lord Himself, who is working out His purposes in history. If we are truly looking to Him for help, we can go about doing what we need to do in quiet confidence, spared of the extremes of proud triumphalism or despair.

God can never be defeated even if at times He takes His time. As we approach Holy Week, we remember a God who wins even when it seemed that He had lost. I recall a Muslim neighbour who told me that although at times Islam seems to be losing ground, Allah will win in the end even if it takes many generations. Followers of a Jesus who died and was raised on the third day should have no excuse for not having the same quiet confidence in their risen Saviour.

NB. I apologise that this edition of the Graceworks Mail is out so late. Last week, a lot of time was spent reflecting on, and praying for, the events in Sarawak.