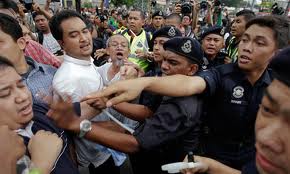 Last night (January 3rd 2006) my sons and I may have broken the law. [In Malaysia I believe all assemblies of more than three people need a permit from the police.]

We took part in a candlelight vigil called by the Malaysian Consultative Council of Buddhism,Christianity, Hinduism and Sikhism (MCCBCHS). There weren’t that many of us but we were definitely more than three. Here is part of an article by Philip Bowring of the International Herald Tribune that gives some background as to why this vigil had been called.

“…a religious court declared that a deceased, M. Moorthy, a member of the first Malaysian team to climb Mount Everest, was a Muslim – and insisted that he be buried according to Muslim rites – despite the fact that he had been born a Hindu and, according to testimony by his wife and family, had never converted to Islam. The powers of the Muslim religious authorities were then confirmed by the High Court, which ruled it could not intervene in a decision by the religious court. In other words, in modern, multiethnic, inclusivist Malaysia, the religious courts are a law unto themselves

This is particularly worrying for non-Muslims. But it has wider implications in a society where all Malays are deemed to be Muslims, whatever they actually believe, and where religious movements by Malays have recently been persecuted on the grounds that they were judged heretical by the religious authorities. One sect that had been declared “apostates” recently saw its headquarters razed to the ground.”

What prompted this writer to overcome his usual social involvement lethargy to come out on a humid evening, braving the possibility of thunder storms, to stand with a group of Hindus, Sikhs, (didn’t notice any Buddhists but I may be wrong) and other Christians in front of the Malaysian High Court building, trying to avoid getting his fingers burnt by melting candle wax? Because I believed it to be the Christian thing to do.

Middle class evangelicals have often focused on evangelism as the primary if not the only means to effect social change. I believe with all my heart that the gospel is the only true hope for the salvation of humankind and that sin cuts across all racial, social and ethnic lines. But then there is also the matter of discipleship. How should people transformed by the gospel live?

We proclaim that the living God is God of compassion and justice. If we claim that we are His children we should be manifesting these same qualities in our lives. In the crucible of daily life, and that includes the political life of one’s country, we should be manifesting these concerns for justice and compassion. And need I say that our God is a god who has a special place in His heart for helpless widows.

The first that M. Moorthy’s widow learnt that her husband had allegedly converted to Islam was upon his death. Desiring to give her husband a proper Hindu burial she wanted to challenge the assertion by the Islamic authorities that her husband was now a Muslim. And found that she could not.

The religious court merely confirmed her husband’s conversion and the highest civil court of the land washed its hands of the matter ruling that it had no right to intervene in a decision made by the religious court.

Those who understand the legal implications of this ruling, are rightly disturbed if not frightened by what it means for the future of a Malaysia that is supposed to be a constitutional monarchy. As a friend said, he went to the candle light vigil because this was a matter of justice and because it was a matter that affected the lives of his children and grandchildren. Justice and the lives of our children. More than reason enough.

I also believe that by living out the character of God in the arena of the daily we also help the cause of evangelism. We call people to repent and to follow the living God. People have a right to know what this God is like. Hopefully they get glimpses of the character of this God in the lives of those who claim to be His children.

I am clear that Christians are not to be confrontational. Indeed we are told “If it is possible, as far as it depends on you, live at peace with everyone” (Romans 12:18). Indeed we are biased towards supporting the government of the day especially when they act righteously (Romans 13:1-7).

But we are also clear that there is only one final authority in our lives and that this authority also tells us “Do not be overcome by evil, but overcome evil with good” (Romans 12:21). And therefore there will be times when we have to say we must obey God rather than man (Acts 5:29).

Let me make it very clear that I am a novice in such matters. Many others have understood the social implications of discipleship long before me and some have paid heavily for their convictions. Last night was my first baby step, and I am a very small baby. I am so much more at home in the world of ideas and words. But there are times when ideas must find feet.

A special bonus was to find my children walking with me.

I told them I was going to join the candle light vigil and why. No. 1 son (19) said straight away that he wanted to come as well. No 2 son (14) then said that he also wanted to come. At first I had said no to no. 2 son. Wasn’t sure if he understood the full implications of what we were doing. Besides it was the first day of a new school term.

Later I decided that he knew enough to be allowed to come. I expect this fight for justice to be a long one. Might as well start them young.

Afterwards, no. 2 son reported that as he was standing there with his candle, one of those who drove by gave him the finger. I asked him what he did in response. He said he lifted his candle higher. Way to go son, way to go.

“Do not be overcome by evil, but overcome evil with good.”

PS. This is a summary of the legal implications of the M Moorthy case by a senior Malaysian Christian lawyer.